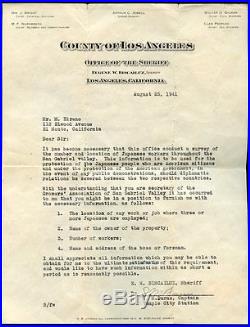 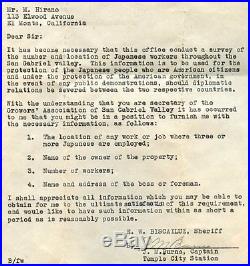 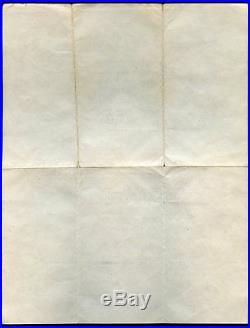 Dated August 25, 1941 and signed by J. Burns, Captain of the Temple City Station on behalf of County Sheriff Eugene W. Biscailuz – addressed to Mr. [Matsutaro] Hirano, 113 Elwood Avenue, El Monte, California. Dear Sir: It has become necessary that this office conduct a survey of the number and location of Japanese workers throughout the San Gabriel valley. This information is to be used for the protection for the Japanese people who are American citizens and under the protection of the American government [my emphasis] , in the event of any public demonstrations, should diplomatic relations be severed between the two respective countries. With the understanding that you are secretary of the Growers Association of the San Gabriel Valley it has occurred to me that you might be in a position to furnish me with the necessary information, as follows. 1 The location of any work or job where three or more Japanese are employed. 2 Name of the owner of the property. 3 Number of workers. 4 Name and address of the boss or foreman. I shall appreciate all information which you may be able to obtain for me to the ultimate satisfaction of this requirement, and woule like to have such information within as short a period as is reasonably possible. From a few other bits of information that I acquired along with this letter, I believe Mr. Hirano was first sent to Tule Lake and later to Heart Mountain. Condition – two vertical folds and one horizontal fold; short ears at the tops of the vertical folds; light wrinkling; light soil. WWII era / World War II. The item “Aug 1941 Los Angeles County Sheriff Letter (Anticipating Japanese Internment)” is in sale since Monday, May 08, 2017. This item is in the category “Collectibles\Militaria\WW II (1939-45)\Original Period Items\United States\Correspondence, Mail”. The seller is “buzzwds” and is located in Santa Monica, California. This item can be shipped worldwide.